In this blog series, we discuss some of our clients and tell a bit more about our cooperation. We will discuss the client's story, but also look at the project from our own consultant's perspective.
This week: PresentationPoint.

Kurt Dupont has been a data and communication specialist for over twenty years and, with PresentationPoint, has developed a number of tools that are used by major players worldwide. Having conquered the world, his eyes are now focused on Belgium. We spoke with Kurt about PowerPoint, the power of real-time data and the PresentationPoint track at Wodan & Co. 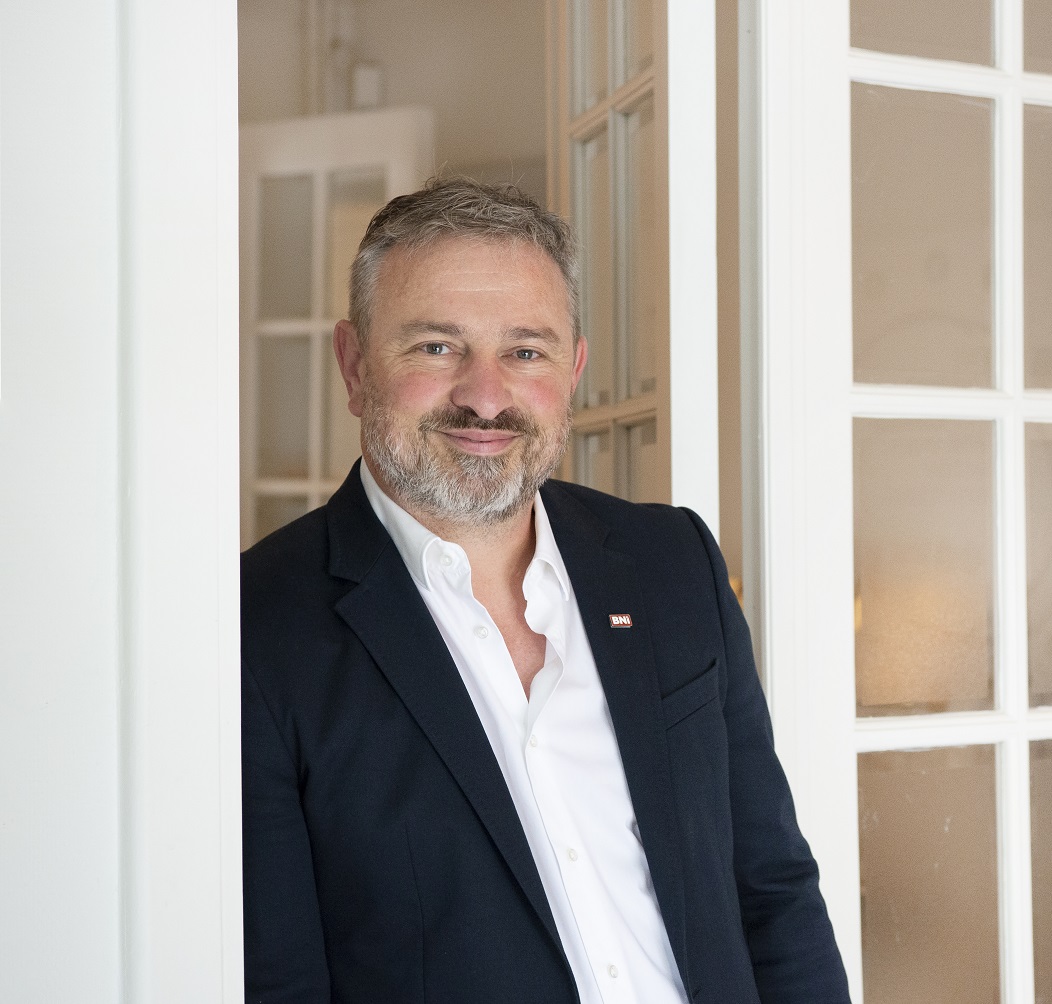 Kurt Dupont: I offer four different tools, but to summarise briefly: I use PowerPoint presentations to bring so-called 'hot data' to users as quickly as possible. Everywhere, you see screens full of information, menus at the chip shop or McDonald's, but also a lot of real-time information, such as the weather, the news, at the airport, etc.

These are of course the screens that you can see in public, but also internally a lot is done with PresentationPoint. My biggest customers are the factories that use screens to communicate with their workers. Workers who don't have a PC, but are on the conveyor belt for example, can see information like safety instructions, KPI's or updates when a new load arrives. Stella Artois has eleven filling lines where bottles are constantly being filled. By showing the daily target on their screens and the current trend - whether they are on schedule or still too slow - they create a kind of gamification, which ensures that the workers are motivated and have something to work towards. 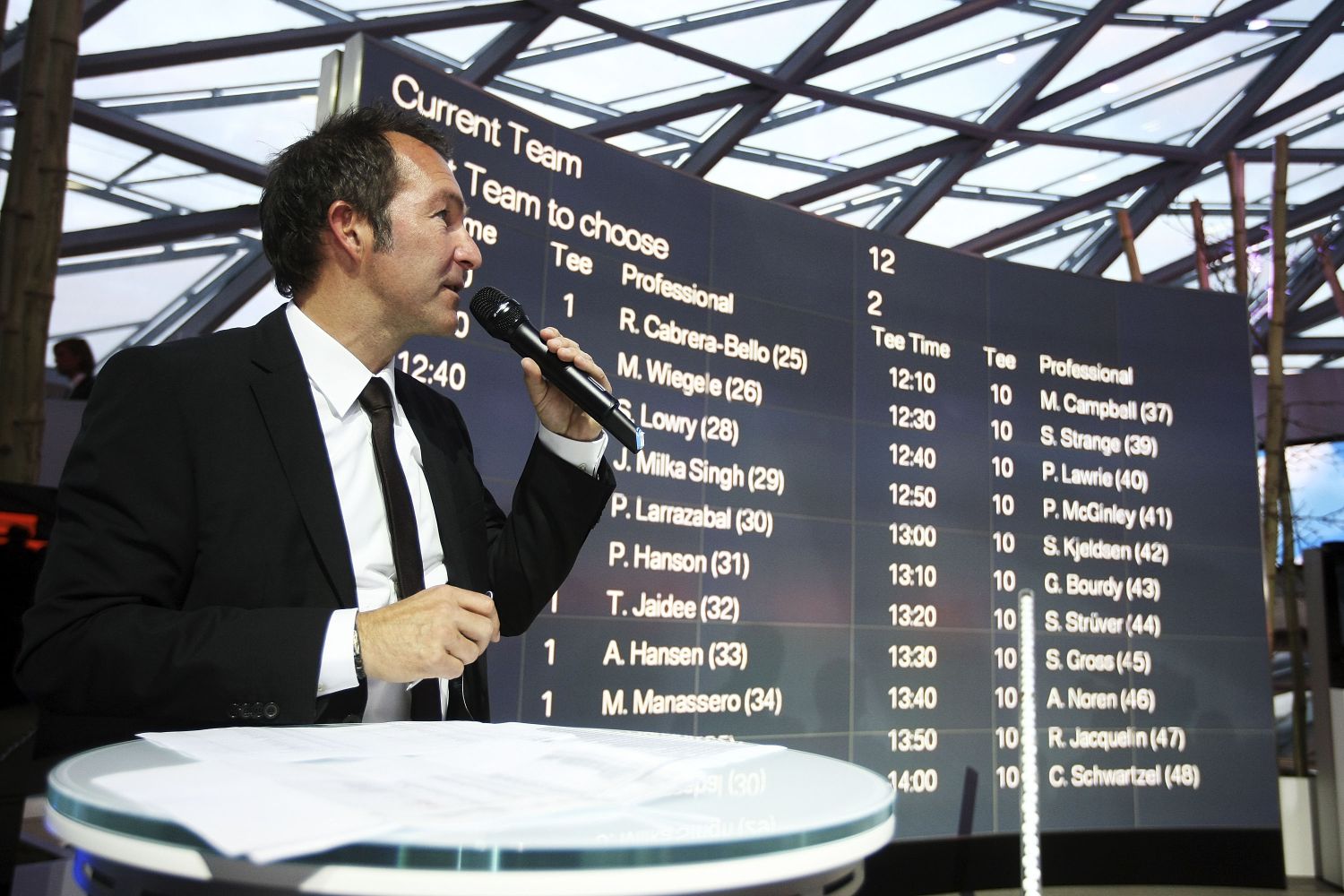 What many people don't realise is that there are quite a few creative and efficient ways to use PowerPoint for your work. For example, DataPoint, my oldest product, can be used to show the latest figures at a weekly meeting without having to update anything yourself. But you can also run a slide show permanently with real-time data, like at the airport.

You have also come across SignageTube at some point. With SignageTube, you upload a presentation to the cloud; this is transformed into a video, which you can then send from a central location to screens worldwide. This is how, for example, the screens in the McDonald's branches are controlled: from one central location, which decides per branch which screen plays which content. Simply via an app, enormously easy to use now that almost all screens are smart TVs. "Netflix for businesses", in fact.

Kurt: In 1992, I started working in Zaventem, where I collaborated on a new central database for the airport. Even then, these large screens were already being used to display flight information; it was by working with them that I got the inspiration to bring this functionality to the general public. PowerPoint was the ideal tool for this, so I started working on plug-ins to extend the programme. In 1998, I started working with PresentationPoint. 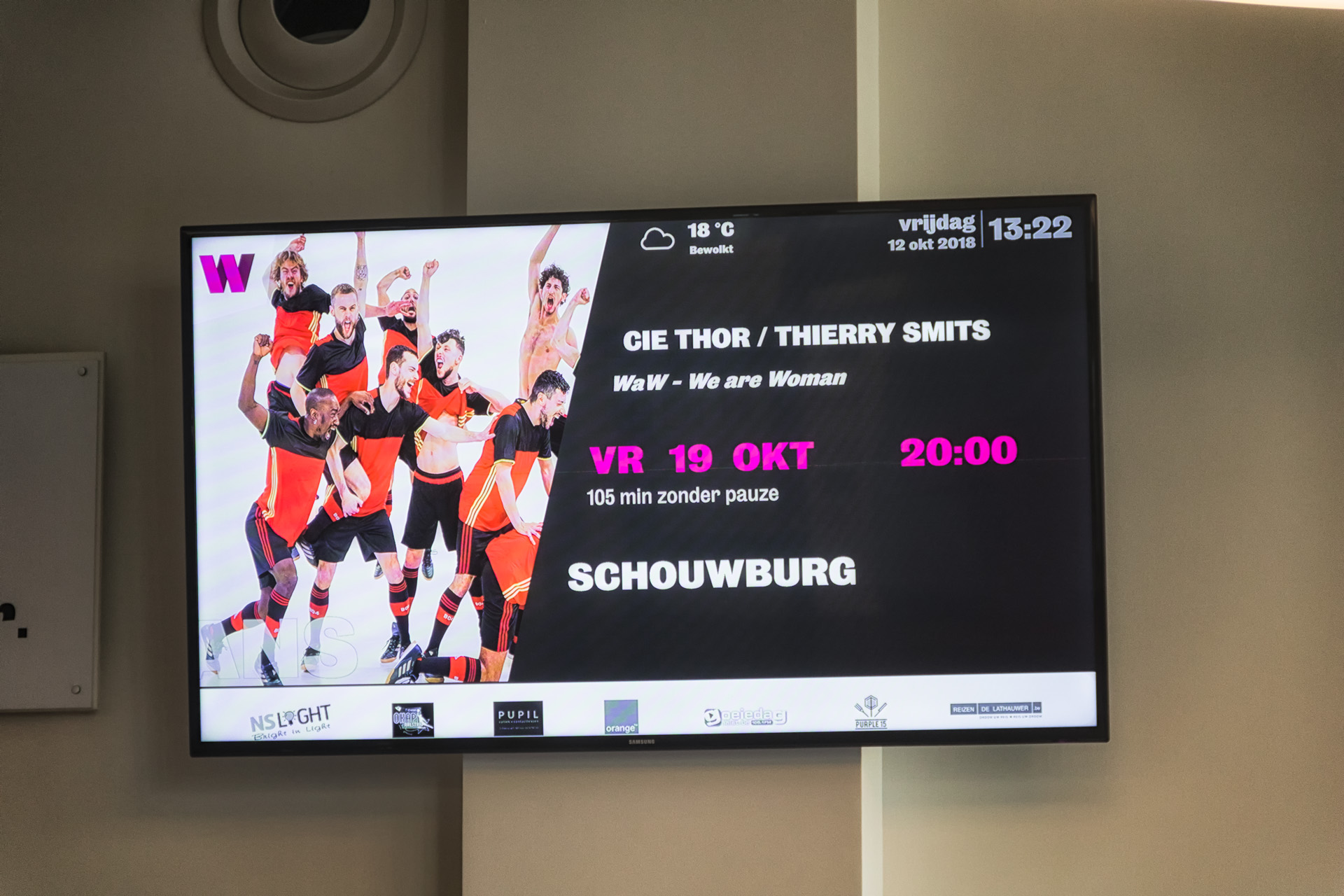 Haven't you had problems with Microsoft itself, creating a service on their platform that they didn't offer?

Kurt: Anything but; PowerPoint is open to its own plug-ins and Microsoft has no problem with me filling such niches. I once went to see the product manager of PowerPoint - I hoped that I could speak for fifteen minutes, but we ended up talking for an hour and a half - and he indicated that what I do is too small a niche for them to be involved in. They see the point of it, of course, but they are busy enough as it is. A win-win situation.

The client list on your website contains a lot of big American names. How come you are so popular there?

Kurt: From the very beginning, I was contacted by customers from the States. I started with a website, not a local company. My goal was to have a global reach with the website, and I did. In the beginning, I tried using Google Adwords, but after an investment of almost 140,000 euros with hardly any return, I stopped doing that. Meanwhile, I have been publishing a blog article every week for 10 years. This includes a lot of evergreen content, which still attracts readers after all this time. By constantly working on it, the reach of my website grew in a very organic way. Some large customers, such as SpaceX, the American Navy, IBM, ... came to PresentationPoint themselves and contacted me - selling myself was no longer necessary.

What are the most important milestones in the evolution of your business?

Kurt: The biggest milestone was in 2003, when I released Datapoint as a finished product. With the platform, anyone - factories, corporate offices, auction houses like Sotheby's, etc. - can add real-time data to their presentations. Just think of airports, where flight information needs to be updated on screens everywhere at all times. In a critical environment such as Sotheby's, presentations refresh every 10 ms, allowing you to follow the current bid at lightning speed, converted live into several currencies.

Apart from that, every year since has been a kind of milestone. PresentationPoint has continued to grow and many interesting customers have come to me in that time. 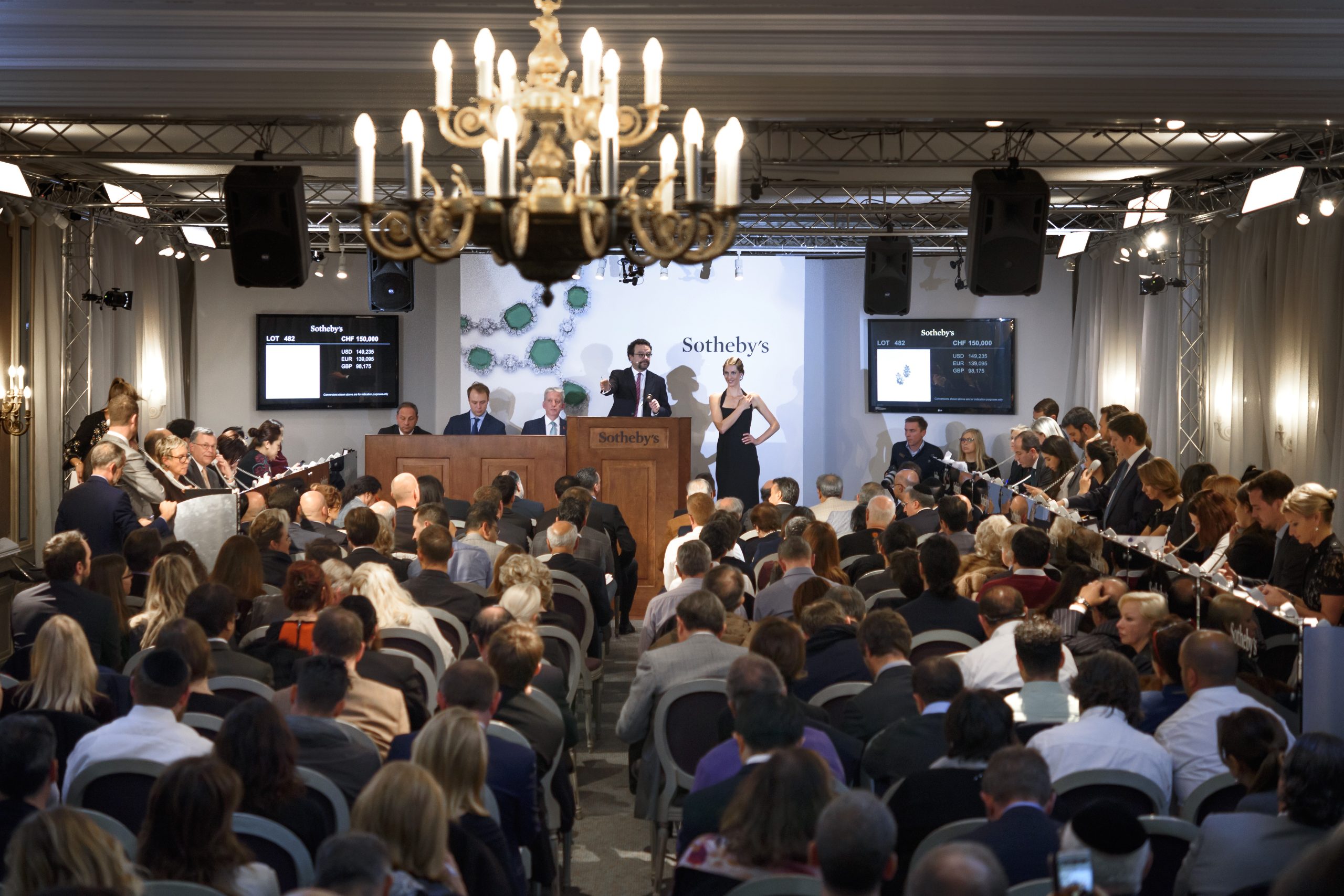 Head of Sotheby’s international jewelery division, David Bennett (C) holds the hammer during a “Magnificent Jewels and Noble Jewels” sales at the auction house on November 11, 2015 in Geneva. All eyes will turn to Sotheby’s when its prized lot, dubbed “Blue Moon” with an estimated sale price between USD 35-55 million (about 32 597 560 to 51 224 737 euros) that will aim to shatter the record for a stone sold at an auction. AFP PHOTO / FABRICE COFFRINI

Kurt: Via BNI Leuven Artois. I was invited to visit the chapter and met Wouter. We quickly planned a 1-on-1 meeting and it came out that Wodan & Co was a good fit for what I needed.

Wouter: Igot to know Kurt as a very driven entrepreneur with great technical ingenuity and a clear product vision, but in our conversation it soon became clear that he had less knowledge of business strategy and commercial approach. This is where Wodan & Co could provide clear added value for him. An agreement was soon reached to work together, and a little later we started a design track.

What kind of course did you follow with us?

Kurt: In five workshops, we looked at the structure of PresentationPoint and the extent to which the offering can be tailored to certain target groups. We worked a lot on pricing and the business model itself, and of course on where we want to go with PresentationPoint and how best to organise this growth.

Wouter: During the design process, we critically examined PresentationPoint. We determined a clear goal, from which we launched various proposals; the existing business model was built from a product focus, which we wanted to transform into more customer-oriented business models. With the products that Kurt has developed over the years, different target groups can be approached with different business models.

Have you experienced any tangible results yet?

Kurt: We have mainly focused on the design phase; concrete results will definitely follow, but only when we move on to implementation.

Wouter: We are already looking forward to helping Kurt with the implementation of the ambitious growth plan!

What does the future hold for PresentationPoint?

Kurt: Most companies start locally and then expand. According to that logic, I would have started in Limburg, then Flanders, then Belgium...but with PresentationPoint it was the other way around. I started with offering my product via a website and from the beginning brought in many foreign - mainly American - customers.

After more than twenty years of working as a sole proprietor, I still haven't founded a 'company'. I would still like to achieve that.

In that sense, I'd like to make the opposite journey; go back to local and build a team from here to grow PresentationPoint. At the moment, we also have too broad an offer, which means that we don't reach many niche markets very well, while we could mean a lot to them as well. So I'd like to start one or more companies from scratch, each focused on using a particular tool to solve a particular problem in a particular niche.

By starting locally, I could also add consultancy to the products I sell and thus offer more of a total package. A shift from selling software licences to projects; I have twenty years of experience, which I would also like to apply hands-on. And also: after more than twenty years of working as a sole proprietor, I still haven't founded a 'company'. I would still like to achieve that.

How did you experience the cooperation?

Very professional, with professional people who have already earned their stars in the corporate environment and are driven to make PresentationPoint a success for the next phases.

Thank you Kurt for the interview and for trusting us with PresentationPoint!